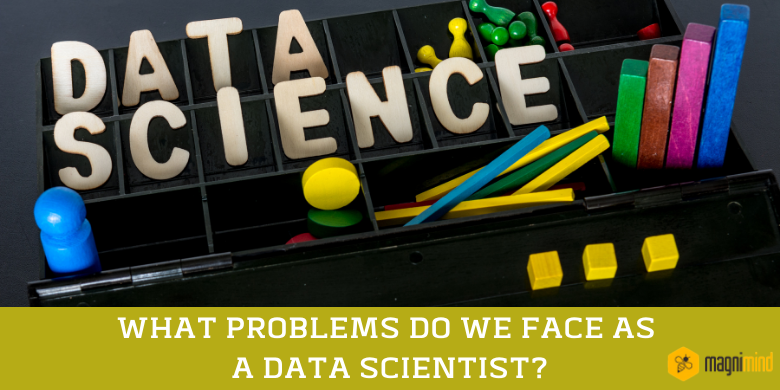 In today’s business landscape, data science has become almost ubiquitous and is steadily gaining control
over the tech field. With a massive amount of data being generated on a regular basis, a huge number of
organizations are trying to leverage the power of data science. With the help of data scientists,
businesses can come up with effective solutions for their problems and predict present and future
trends, which directly lead to success. But as with any other field, data science also comes with its fair
share of difficulties.

If you’re planning to pursue a data science career, here’re the most common problems faced by data
scientists you should be aware of.

1- The bearer of negative news

One of the major problems of working as a data scientist is that you may need to communicate the bad
news to the management. If your analysis portrays a somewhat negative picture of where your company
is headed or identifies serious problems, you’d often find it uncomfortable to present that information
to the management. While you’d never be the cause of that negative information, your boss might take
his/her dissatisfaction out on you.

It’s extremely important for data scientists to have the right type of data to make an analysis accurate.
And obtaining access to a diverse range of data in the appropriate format isn’t only difficult but time-
consuming as well. There’re different types of avenues from where issues could arise – from insufficient
volume of data to hidden data to less variety in the type of data. However, the responsibility of curating
data comes up to data scientists in order to leverage the full potential of data science.

Have you ever wondered why domain expertise is considered to be one of the major skills of a data
scientist? Put simply, they bridge the gap between technical and non-technical departments. It’s often
said that the best data scientists aren’t only machine learning experts or adept statisticians, they’re also
an authority in the business domain where they’re applying their data science skills. Those who lack
cross-department expertise sometimes find it difficult to properly understand the organizational aspect
of a given problem, which may lead to an inaccurate analysis.

On data science related projects, multiple departments like the engineering department, data science
department etc generally work together and thus, it’s extremely necessary to collaborate and define
clear expectations and boundaries to avoid complications down the line. A common problem often
faced by data scientists is facilitating cooperation between multiple departments on how data needs to
be collected and interpreted. The lack of harmony between teams often leads to inaccurate collection
and analysis of data.

The challenges in the data science field will always be there and often seem to be intimidating but most
of them can be averted with proper communication and enough preparation. If you find the above-
mentioned problems won’t be a deterrent for you to become a data scientist, Magnimind Academy’s
data science bootcamp in Silicon Valley should be a good first move for you.